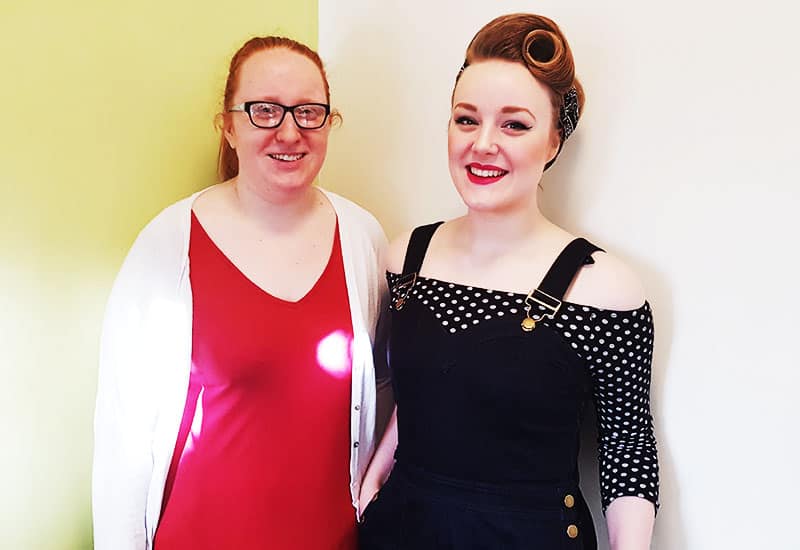 Happy New Year from all of us at Progress! Last month was the exciting big reveal for on our chosen charity: Acorns Children’s Hospice. We decided upon Acorns due to the incredible work and specialist care their services provide to both life-limited and threatened children as well as their families.

To ensure we are best utilising our resources, we decided to allocate two charity champions from within our organisation to liaise with Acorns to brainstorm and implement the ideas that they come up with.

We were extremely pleased with the number of applicants from our staff team. It was a very tough choice to make, but we finally managed to whittle it down to the last two. We are pleased to introduce you to our two champions, Anna Hickman, Fostering Support Worker and; Jessica Foulkes, one of our Residential Support Workers at Oak Cottage.

As an advocate of philanthropy for as long as she can remember, Anna was an ideal fit as one of our charity champions. Her love of charity work began in secondary school when there was special research being conducted in the local community, and Anna wanted to get involved. She put together a proposal and the governor’s love it so much; they gave her the green light. Her first fundraising attempt was a great success, raising £250 in one day, having planned and executed the whole event herself. To present day, she regularly fundraises and carries out small projects for a number of charities. When asked what inspires her to give back her response is “I am very fortunate in life, and many aren’t so fortunate so just want to make people’s lives better as much as I can.” As well as raising money, Anna also donates a lot of her time to her local community. Amongst other things, since the age of 14, Anna has been making fleece rags for families with young children or those expecting little ones. Between her and her friends, she also donates them to the local neonatal unit; something she plans on continuing for Acorns.

She started off her professional career as a student social worker before moving into elderly care services. She decided to carry out her career working with children as she felt this was a much better fit. “Children’s are very sincere, and so you know when you’re making a positive impact; the mark you make in their lives now can have a substantial impact on their futures.”

“We are called “Progress Care”. That doesn’t, and shouldn’t only apply to the lives of the children in our care but in our local community as well.”

Jessica has been a Residential Support Worker at Progress for the last three years. She grew up with her biological parents in a household that fostered other young children. Thanks to her environment, she grew up around fostering which inspired her to make a difference to others. Jessica worked in Africa in 2010, with a fantastic charity “hands at work” in which she could help those in local villages that needed it: cleaning the house, making food and giving out supplies. Another trip was spent working with primary schools and orphanages providing them with deworming tablets. The challenge they faced was that food and water were needed to keep the tablet down and there was no guarantee they would have a meal waiting for them when they got home. So as well as giving the medication they also made and distributed meals to all the children; an experience they found incredibly rewarding.

She and her friends raised funds for a trip themselves to go back to Africa so that they could take supplies with them. One memory she has is with a mother who had a fourteen-year-old girl with cerebral palsy. Her mother didn’t have any form of transport and so still carried her teenager daughter around on her back with swaddling, as she did with her as a child. Thanks to the donations that Jess’s group were able to raise, they were able to take a wheelchair across with them – amongst other useful fit-for-purpose items – which meant their trip had a monumental impact on the lives of several of the villagers they visited. Like Anna, Jess has always been involved in charity and has done a lot of her own fundraising along the way. Currently, Jessica makes bonding squares — identical squares made for mothers of premature babies that allow them to keep building a bond while the child is still in intensive care. The idea is that the mum will wear one and one is left with the baby, swapping them every day. She currently offers this to mothers in a hospital in Liverpool; something she wishes to provide to the parents benefitting from Acorns services.

The next step for both of our Charity champions is to meet with Acorns and brainstorm some exciting fundraising ideas and to decide how to put the money raised to good use. Stay tuned for updates on our fundraising events and opportunities. In the coming weeks, we will be sharing a fantastic opportunity for you to get involved in Anna and Jessica’s craft projects.